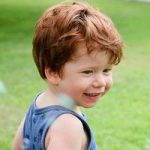 Hi Carmel, just want to say thanks for all you’ve done so far with Danny. I’ve really noticed how far he’s come since he started with you 8 months ago. I was very pleased to have found you online and that you weren’t that far a drive away. I nearly forget the behaviours Danny had at that time. They seem so long away. Thank God we have overcome those!

Who’d have thought the child that seemed to be so afraid of his baby brother that he didn’t like to even look at him, now doesn’t mind him at all and will even sit right beside him and do his own thing.

There’s been a major improvement in Danny’s eye contact and he’s also improved at following demands. We’re still far from the level we would like him to be but towards the child he was at the beginning he has come a long way.

We have sailed through detoxing augmentin – a few bumps along the way but with your support and advice he has overcome any illness he has been fighting. Danny has also had a constitutional remedy, made to suit him and changed along the way. From that we’ve seen great improvements. He has stopped stripping off his clothes. Thankfully that too is now a distant memory.

We are grateful for all you’ve done with Danny and the fact that you are so responsive each and every time I contact you or have a question. You are always very helpful.

I will definitely be continuing with homeopathy. Thanks again.