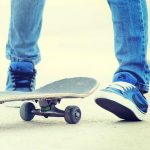 We first brought our 15 year old son to Carmel for Homeopthic Detox Therapy in 2012. He has a diagnosis of Asperger’s Syndrome which has particularly caused him difficulty in social situations. He had previously been to another homeopath in his early years, when he had recurrent ear and throat infections, which were successfully resolved by homeopathy at that time.

Carmel took a very detailed case history and prescribed a constitutional remedy which I felt suited our son very well. Within days of taking that remedy, we noticed that he was engaging with us more, initiating conversations and voluntarily sitting with the family in the evening, instead of spending hours in his bedroom alone.

As well as an ongoing constitutional remedy, our son received a number of homeopathic detox remedies over a 2 year period. The most significant of these had to do with a medication which my wife had received during pregnancy. During this detox we saw a big jump in our son’s social engagement. He began to make friends at school and became more interested in the real world.

Our son continues to see Carmel for a constitutional remedy two or three times a year, according to need. He is now doing well in 3rd level education. He has not suffered as much from anxiety as other ASD children that we know. I believe this is, in no small measure, due to the ongoing support he gets from homeopathy. I highly recommend Carmel as a practitioner of homeopathy. We are delighted with the help we have got for our son.